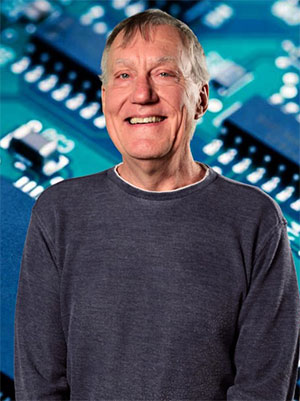 Frank Mercer's Zoom retirement party took place on Wed, Jan 27. Sixteen faculty and staff showed up to honor his 30 plus years of service to ECE and present him with a $200 VISA gift card.

Co-worker David Modisette said, "Frank was Mr. IT and the go-to man for computer issues."

"Frank maintained the department internet system, was the network security guy, configured all the teaching computers as well as the Faculty and Graduate computers," said Modisette.

"He did it all: From install cables, racks, and servers to the millions of dollars of software - LabVIEW, MatLab, EM simulation, Spice, and more. He maintained and operated the ECE video surveillance system and its software and helped everyone and anyone with their computer issues."

Frank Mercer's work has been noted by graduate students. Many ECE dissertations written during the last three decades show Frank's name featured prominently in the acknowledgments.

Frank, who is 66, was asked what his favorite and worst times were during the last three decades at ECE during the Zoom party, and he didn't miss a beat.

"My best day was when Christos introduced me to Julie Lawrence," Frank said.

He was referring to the day then ECE Chair Christos Christodoulou was giving Ph.D. candidate Lawrence a tour of the building, and they ended up in Frank's office. It was love at first sight, leading to courtship and marriage.

The worst day in Frank's career was when one of Frank's coworkers drilled into a board donated to ECE by Sandia National Labs: This board was impregnated with magnesium and designed to self-destruct if it got into the wrong hands.

The heat from the drilling set the board ablaze, and the fire got worse with every passing moment.

"Have you ever seen magnesium burn!?!" Frank asked us wildly.

It took two fire extinguishers to put out that blaze, leaving Frank shaken to this day.

Frank Mercer's Zoom retirement party lasted for an hour and a half, and everybody had a Frank Mercer story to tell. Including ECE staff poet Chuck Reuben who left us with the following poem.

Frank Mercer was there for you and for me,
Thirty plus years at EECE
He kept the Beatles turned down low,
(Frank had a rock-n-roll workflow.)

Frank Mercer was the Database King
His wit could bite, his tongue could sting,
He’d give you an answer or at least have a hunch,
He’d share with you after his two-hour lunch.

And if you got that blue screen of death
You’d run to his office — arrive out of breath,
He’d ask you what websites you happened to visit,
And tell you they were way too explicit.

You wanted an answer, you wanted it now!
But Frank would make you slink and bow,
And when you’re about to throw a fit
Frank would tell you to “google it!”

Taking inventory, Frank did despise,
Computers and mice, he kept us apprised
Of things that were missing or turned in too late:
Evidence for a future court date.

HR made an offer Frank could not refuse,
(After marrying Julie and giving up booze)
He pulls on his boots and heads for the hills:
Because he no longer must work to pay bills.