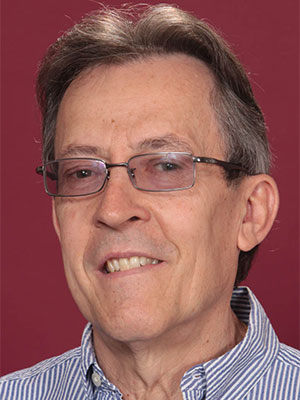 “My contribution was purely literary, which shows that you can have a mathematician that sometimes writes intelligible stuff,” said Palacios.

Palacios got his B.S. in Math from Universidad Simón Bolívar, Caracas, Venezuela (1976) and his Ph.D. in Math in the University of California at Berkeley (1982).

He worked for five years at the New Jersey Institute of Technology, Newark, NJ (1988-1993) and for about 25 years at his undergraduate alma mater. He served as Vice President for Academic Affairs (2001-2005).

Palacios, 66, has been with the Electrical & Computer Engineering Department since 2014, first as a research professor and an adjunct, now as a Lecturer III.

“I lectured two courses the past Spring, and I plan to lecture two courses in the Fall, Foundations of Computing and Probabilistic methods in Engineering, hopefully, both face to face,” said Palacios.

“The pandemic has not affected my research much,” he continued. “In my case, research is conducted at home, in isolation, no labs involved, at most email exchanges with colleagues, so it is basically the same, pandemic or no pandemic; what has changed is the teaching, which has been dull and painful, without human interactions.”

Palacios finds comfort in writing short stories and feels that every serious academic can find peace in pursuing a hobby.

“I believe that a serious academic should always be doing playful things that she or he enjoys; otherwise, life becomes dull and colorless.”

Even when Palacios pursued his Ph.D. in Math at Berkeley, he found time to contribute to the literary world. He published his first short story in The Daily Californian as a student. A collection of stories followed in 1988, and many others have appeared throughout the years.

The trials and tribulations of Palacios' family have given him plenty of things to write about: His maternal grandparents migrated from Spain to France during the Spanish Civil War.  Then his parents emigrated to Venezuela, where he was born. Later, he relocated to the U.S. with his family.

“There are a million stories of migrations being written every day: it is a very difficult transition for anyone undergoing it.  It marks you forever,” said Palacios.

"The empty nest syndrome" inspired Palacios' recently published short story after his two daughters left for home for graduate and undergraduate studies two years ago. He also found inspiration in a New Yorker article that touched upon the mark left on psychoanalyst Sigmund Freud after his daughter Sophie died in the 1918-20 pandemic.

Palacios has found acceptance at UNM to pursue both his academic and literary interests.

“I would hope that a university, which encompasses and welcomes universal ideas and universal knowledge, would welcome someone who attempts to do serious stuff in fields at first sight as dissimilar as Math and short story writing,” said Palacios.

“Fortunately, I have found, if not encouragement, at least tolerance to do what I like to do in all places I have worked.”

"First, we threw away the bananas because nobody else eats them in our household.  Then it was the turn of the carnation bouquet in the kitchen that she had brought in one of her impulsive domestic acts.  We kept adding water to the flower vase every so often, but after three weeks, the carnations had become a wilted coven of flamenco dancers turned upside down. We emptied the fridge of all her traces:  the bag of bitter arugula, the puckered blueberries, the almond milk, the ninety-nine percent lactose-free cheese and the non-GMO organic buttery spread."